Sprinkles is handing out free cupcakes tonight between 8 p.m. and 9 p.m. to promote its newly expanded hours.

One per customer. Anything in the case. No purchase necessary.
The fabulous cupcake bakery at Preston Center, at the southeast corner of Preston Road and Northwest Highway.
The store's new hours are 9 a.m. to 9 p.m. Monday through Saturday and 10 a.m. to 8 p.m. on Sundays.
Posted by B in the Know at 6:45 AM No comments:

Pub Crawl for a Cause

Labels: beer, charity, good with friends, I'm Thirsty, nice stuff to do for others 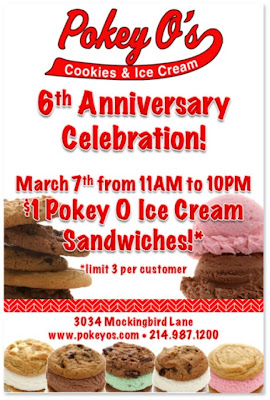 I'm a good Texan, so is the Sig-O, despite technically from Oklahoma. So, we're all in favor of drinking local, which is why we're excited about Sigel's upcoming TexasFest - A Lone Star Celebration of Texas Craft Beer, Spirits & Wine at Sigel's Elite (3209 N. Fitzhugh)

Reserve Your TexasFest Passport
Your TexasFest Passport entitles you to taste any 12 of the following:
21 Texas Brews, 19 Texas Spirits & 6 Texas Wines
Distillery, brewery and winery representatives will be on hand to sample a selection of Texas-made libations and to answer any questions you may have about them. Enjoy special sale prices on all the products. Whether you are a novice trying to broaden your knowledge or a seasoned connoisseur looking to refresh your palate, this spectacular Texas event should not be missed!
Click here to RSVP & reserve your Passport
Posted by B in the Know at 9:00 AM No comments:

I wanted Green House to wow me for lunch. It's sunny, it's 70, and the lines weren't that long. The Arts District Food Truck area has actually moved over in front of the Winspear, which is a much better location than the previous parking between the Belo Mansion and a parking lot/construction zone. The scene was pretty much perfect for wowing, but it just didn't quite do it.

I'd heard that Green House was doing short rib sandwiches, and I immediately wanted to check it out. It's officially a beef short rib sandwich with horseradish cream and baby greens. So I wandered over, enjoyed the sunshine and waited in line. Watching the guy taking the orders try to do math in his head and then have to write it down didn't inspire a whole lot of confidence in his charging abilities, so I added up the cost of my sandwich, chips and drink on my own. Except I couldn't. Not because I'm math retarded, thanks. The short rib sandwich was a special and didn't have a price listed. Looking at the fact the other sandwiches were in the $7-$8 range, I figured it would be about the same. So, when I get to the front of the line and order from the math wonderboy, he told me the total was $14.07, I was like what? How much is that sandwich? He tells me it's $9.50. (Add in chips for $1.50 and drink for $2. Really? $2 drink?) Um, ok, not normally what I'd spend on a sandwich, particularly one that doesn't come with chips. Seriously, it's kind of annoying to be expected to pay almost $10 for a sandwich and only get . . . a sandwich. Yes, I know I can go other places, but I didn't. They call my name a few minutes later and I snag my food and a spot to eat. (Dear Dallas Arts District, you could invest in some more picnic tables and nobody would complain)

I open up their environmentally friendly clamshell (points for being green.) and the short rib sandwich was pretty. Big meaty pieces of short rib and I was excited for the first bite. So I took it. It was good. The short rib was tender and clearly cooked well. The horseradish cream could have used a little more horseradish. And the baby greens, well, they were just mixed greens. There's clearly some creative license in the menu creation for most places, so nobody is getting beaten up on that one. The sandwich was good. It really was. But for freaking $9.50 just for a sandwich, I think I should be allowed to expect better than just good.

And yes, I'm whining about the prices. Not because I mind paying for good food, but because their prices are higher than other food trucks. $14 for lunch at a food truck just seems a little high. But I make these sacrifices so you get to know what's going on out there. You're welcome.

Definitely not disappointed to have spent the calories on that sandwich, but a little disappointed that I paid almost $10 for it. Would I give Green House another short, probably. But that's because I'm still enjoying the sugar high from Limonata Pellegrino I got there.
Posted by B in the Know at 10:52 AM No comments:

What to Do to Celebrate Texas Turning 176 Years Young? 99 Cent Pie Slices at Norma's

Just got an update from Normas:  "We apologize for any confusion, but during the Texas Independence Day celebration, only the pecan pie slices will be 99 cents. All other Texas Menu items, including Frito pie, will be regular price."


We've got your Friday lunch plans set up for you since your good old friend Texas is turning 176. Naturally, you’re going to want to celebrate over lunch. Head over to Norma’s. They’re serving up some birthday Texas Frito pie for 99 cents each.