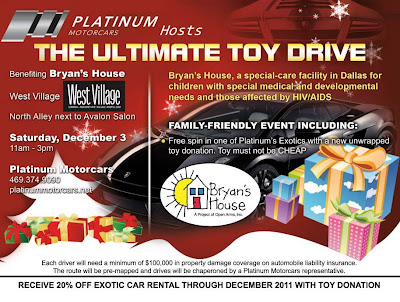 Labels: charity, dallas rocks, free, nice stuff to do for others, speed Check out this great deal from the Cut & Paste via Travelzoo Department:


The Dallas Symphony Orchestra's beloved "Christmas Celebration" concert, considered "one of the best holiday shows of its kind" by The Dallas Morning News, is all new this year. Travelzoo subscribers can save 50% on tickets with this exclusive Local Deal. Grand Tier, Dress Circle or Orchestra seats are $18-$50 (regularly $36-$100) for the following performances at Morton H. Meyerson Symphony Center:• Thursday, Dec. 15 at 7:30 p.m.• Saturday, Dec. 17 at 2:30 p.m.• Sunday, Dec. 18 at 7:30 p.m.Conductor Lawrence Loh will lead the Dallas Symphony Orchestra, Dallas Symphony Chorus and the Christmas Celebration Children's Choir in a program filled with Christmas carols and holiday favorites. Get it here.
Posted by B in the Know at 9:48 AM No comments:

In the unfortunate event that you are living up north or stuck up north with family and shopping, we encourage you to get a FREE glass of wine and relax at Silver Fox. Their bar apps are pretty good too. Check it out: The headline kind of says it all. But you should check out the site. Here's a link to our Editor's recent contribution: http://travel.dmagazine.com/2011/11/08/aspen-colorado/
Posted by B in the Know at 9:13 AM No comments:

Cocktails for a Cure for The Resource Center at Hotel Palomar

Labels: celebration, charity, date idea, fun stuff to do, nice stuff to do for others, Party

Mark Your Calendar for 60 Cent Burgers at Burger House

From the Cut & Paste via Press Release Division:
When Burger House first opened its doors on Hillcrest in 1951, Dallas was quite a bit different than it is today. With just four lanes, newly opened Central Expressway stretched just over two miles from the northern edge of downtown to Northwest Highway. Families gathered around black-and-white television sets to watch popular new sitcom “I Love Lucy.”  Still just a high-schooler in Memphis, Elvis’ gyrating hips wouldn’t send SMU girls into a frenzy for another five years. A cheeseburger fries and a drink would set you back less than a dollar.
A lot has changed in the past 60 years, but Burger House’s loyal customers know that some things are just too good to mess with.  That’s why the burgers, fries and shakes at Burger House are made the same way today as they were way back in 1951. For one day only, on December 13, Burger House will make one welcome change.  To celebrate their milestone anniversary, on Tuesday, December 13, 2011, all Burger House locations will serve their famous cheeseburgers for just 60 cents and give away special prizes throughout the day.
Burger House on Mockingbird, located at 6248 E. Mockingbird Lane, will support local schools with a French-fry eating contest for students from 3 to 5 p.m. The first student to finish their basket of fries will win free fries for a year, as well as a donation to their school.
Free burgers, fries, shakes, hot dogs, T-shirts and hats will be given away throughout the day to diners who complete an info card in store. Current patrons are also being encouraged to sport their Burger House t-shirts for the celebration. Hourly prizes, including free burgers, fries and milkshakes for a year, will be up for grabs at Hillcrest and Mockingbird locations. One grand prize winner will win a 50-person hamburger party catered by Burger House, a $650 dollar value.
Posted by B in the Know at 12:00 PM No comments:

Brazilian Churascaria Dinner Deal for 2 for only $25!

Villa's Grill in Irving earned a Most Delicious Dining Deal in the Metroplex award in 2009 from D Magazine, which called a meal at the Brazilian steakhouse an "all-you-can-eat meat parade." With this deal, two people can dine on unlimited amounts of steak, lamb, sausage, salad and more for $25, regularly $50.

With this deal, feast on:

• Endless trips to the 20-item salad bar and a rotating selection of hot Brazilian side dishes like fried bananas, yucca, beans and potatoes

• Two beverages including tea, coffee or fresh squeezed limeade (up to $2.50 each)

Villa's is BYOB with a $5 corkage fee for wine and none for beer. Located in historic downtown Irving near the South Irving DART station, Villa's is also 20 minutes from downtown Dallas, Love Field and Dallas/Fort Worth International.


Get it Here: http://www.travelzoo.com/local-deals/Dallas/Restaurant/8285
Posted by B in the Know at 8:12 AM No comments: Sabering Champagne at Winetastic this Weekend!

12 Hours on a Treadmill to Help End Homelessness

Labels: charity, nice stuff to do for others, running, speed, sports

Enjoy the Nutcracker by Texas Ballet Theater for only $25

Enter a holiday dream land filled with sugar plums and sweets with Texas Ballet Theater’s performance of “The Nutcracker." With this Local Deal, save up to 50% on tickets to see the holiday classic at Winspear Opera House over Thanksgiving weekend.The following seating levels are available for all performances Friday, Nov. 25, to Sunday, Nov. 27:• Orchestra Terrace ... $25 (regularly $51.50)• Orchestra ... $31 (regularly $61.50) • Corps Circle ... $51 (regularly $69.50)Hear the sounds of one of Tchaikovsky’s most famous scores and experience Texas Ballet Theater's beautiful costumes, sets and choreography. Click here for the details and to get your tickets.
Posted by B in the Know at 7:36 AM No comments:

From the Cut and Pate via Eats Blog Division:
Lucky Layla Farms and Lavon Farms hosts a customer appreciation day 1 to 5 p.m. Nov. 19 (that's a Saturday). It's a chance to visit a working dairy farm with tours led by owner Todd Moore. Families are welcome.
There will be plenty of samples on hand, including cheeses and drinkable yogurt, and the farm store will be open, where you can purchase a number of dairy products, including Grade A raw cow's milk. That's the only legal way to purchase raw milk - at the farm. Lavon Farms is at 3721 N. Jupiter Road in Plano.
Posted by B in the Know at 11:16 AM No comments:

Tiff's Treats for $3 a Dozen for Charity!

Their fabulous fall sale gets bigger and better each year! Texas Discovery Gardens members receive 10 percent off their plant purchases. Memberships can be bought at the door and are specially reduced in price for our 70th Anniversary. The fall sale offers many of the wonderful host and nectar plants from our spring sale, as well as hard-to-find native trees and shrubs. Click here for more information.
Posted by B in the Know at 11:49 AM No comments:

This one is from the Cut & Paste Via Travelzoo Division, but will get you some freaking good sushi for half off at Deep Sushi:

The Dallas Observer says that "a passion for creative sushi is evident" when you first walk in the door at Deep Sushi, a hip Deep Ellum spot that earns a 4-star rating from Citysearch users. With this exclusive Local Deal, two people can savor a Japanese dinner for $35, regularly $76.

Step inside the "urban chic" interior praised by D Magazine and choose your own three-course sushi experience from the extensive menu, such as:

• Any combination of soups, salads or appetizers, such as the shrimp and vegetable tempura paired with two Deep Sushi house salads (up to $18 total)
• A choice of any two entrees or three sushi and sashimi roll options. Try the fire-grilled beef tenderloin with vegetables or the teppanyaki scallops; or pick the Deep Sushi platter with a variety of fresh sushi and sashimi, paired with the Spirit of Texas roll (tuna, crab, cucumber and jalapeno) along with a Stripe T roll (salmon, crab, scallion and ginger, wrapped in cucumber) (up to $52 total)
• Any shared dessert, like the "divine" fried banana tempura with red bean ice cream praised by D Magazine

Click here to get yours.
Posted by B in the Know at 7:15 AM No comments: